Newcastle United have announced a new kit sponsorship deal with Wonga.com that will see the latter replace Virgin Money as jersey sponsors beginning the 2013/2014 season. The four year strip sponsorship deal, which also includes stadium naming rights, will earn Newcastle an estimated £24m ( over the entire duration) and will also see Wonga pump in £1.5m towards the Magpies’ academy and Foundation Enterprise scheme. The news hasn’t been received well in the North-East, with many dubbing Wonga to be “loan sharks” because of the high rate of interest they charge ( APR 4,214% for short term loans)

Wonga have however chosen to change the name of the Sports Direct Arena back to St.James Park, which has to a certain extent helped to soften the hostility towards it.

Another problem Newcastle could have is that their Muslim players ( Demba Ba, Papiss Cisse, Hatem Ben Arfa and Cheick Tiote- all regular starters for the Magpies) may opt not to wear the Wonga sponsored jerseys as earning interest from lending money is prohibited under Sharia Law. 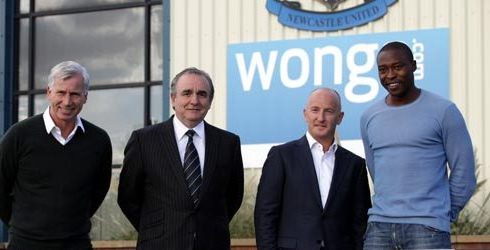 Other prominent British clubs to be sponsored by Wonga include Heart of Midlothian and Blackpool FC.