This is the new Russia kit 12-13, Russia’s Euro 2012 kit to be worn in Ukraine and Poland next summer at the European Championships. The new Russia Euro 2012 jersey was unveiled by kit makers Adidas in November 2011 at the Balchug Hotel in the city of Moscow. Russia qualified directly from Group B for Euro 2012 and reached the semifinals of Euro 2008 before losing to Spain.

Russia’s new shirt remains in the national colour of red but it also has blue and white diagonal stripes to reflect the other colours of the Russian flag. The new kit has a hauberk ( chainmail) element to it, resembling the armor worn by knights of the past to battle.

The Adidas logo on the new Russian kit is gold in colour with the Adidas stripes on the shoulders also golden in colour.

The new Russian Euro 2012 shirt will be worn for the first time by the nation’s players in their friendly against Greece on November 11, 2011.

Here are some photos of the new Russia kit. 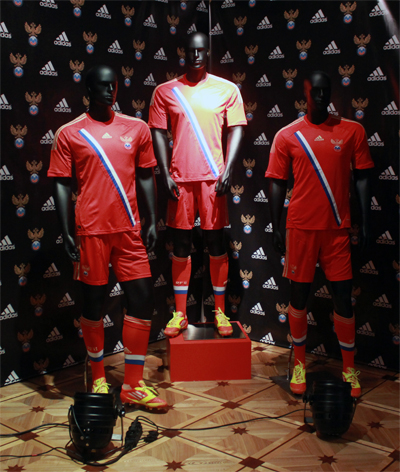